Is there anything quite so flirtatious as a Chanterelle mushroom? Hunting them is a thrilling adventure. Their bright orange caps peek out from under old logs, hide under moss. Their enticing smell- a combination of fresh apricots and flowers and damp earth- lingers in the air and teases me as I search for them. If mushrooms had a personality they'd be mischievous and playful, always drawing me further into the woods. 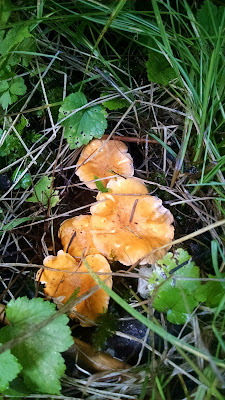 This year, I was lucky enough to be accompanied on a mushroom hunt by my boyfriend. Let me tell you, mushroom hunting is just about the best date there ever could be. It's was so much fun to explore the woods together, letting out a good holler when I found some bright orange beauties staring up at me. And besides, chanterelles are sensual. Their sweet earthy perfume and perfect ridges and delicate texture evoke images of peaches and cream and silk and softness. Together we trudged through some damp woods by a stream, releasing the spicy scent of the wild ginger underfoot (I harvested some of that, too, for bitters and tea in the future) and damp moss and fresh mushrooms. 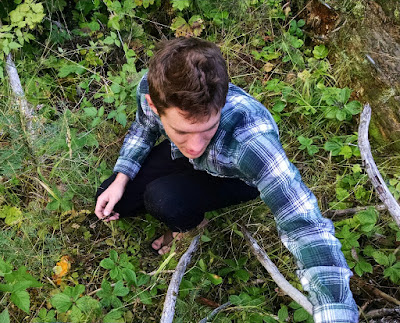 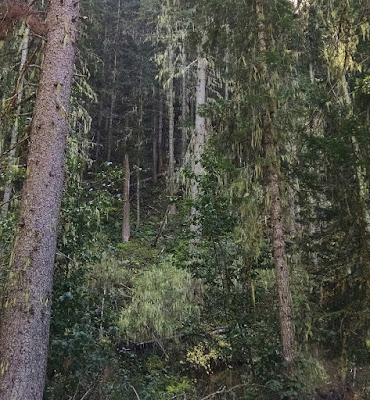 The light coming through the dark woods was mottled and green and the lichens dripping from the trees made us feel like we were elves or pixies in another world entirely. It's so easy to get lost in the moment when foraging which is why I love it so much. And it's even more fun to be able to share that love with someone else and see the light in his eyes when he discovered his first big patch of chanterelles: 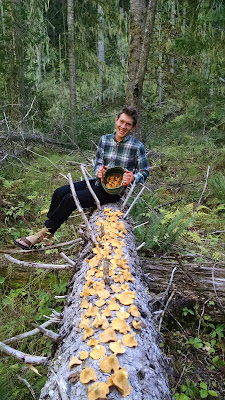 As we harvested the chanterelles, we were careful to cut them cleanly from their stalks (leaving the bottom part of the stalk in the ground so more mushrooms would grow from it) and brush dirt and debris off gently as we went. It's generally not a great idea to scrub mushrooms or soak them for very long as they can absorb water and become damaged so we did as much in the field as we could. 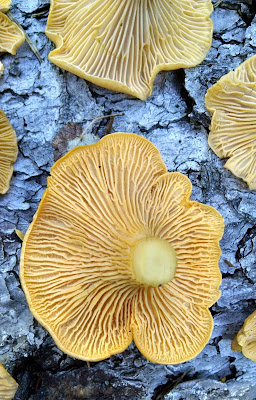 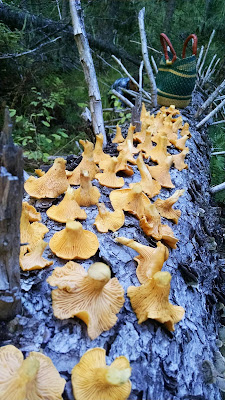 Chanterelles, along with most wild mushrooms, are usually used in savory applications- cream of mushroom soup, in pastas, and accompanying meat. But the floral and fruity perfume of these mushrooms inspired me to try some sweeter applications. The first order of business, however, was to sauté some in butter for my trusty foraging partner and my dad so they could taste the pure deliciousness of fresh chanterelles. There's really no better way to highlight a chanterelle than a very simple presentation when they are super fresh.

But for the rest: processing time! I decided to start out by making chanterelle-infused cream and almond milk (since I can't eat dairy and I want to try my concoctions too!)

To do this, I combined 3 parts cream and 1 part almond milk. I roughly chopped some chanterelles and covered them with the cream mixture, then simmered them very gently for about half an hour. I let the mixture cool to room temperature, then stuck it in the fridge overnight. In the morning I heated it slightly and strained the mushrooms out. I froze the cream for further use and saved the mushrooms for some tasty pasta (see below.) To make the almond milk infusion I followed the same steps, except just covered the mushrooms with almond milk. I think I actually preferred the almond milk-infused chanterelles because the scent of the mushrooms was more noticeable. We'll see how each tastes in further tests!

I also decided to make candied chanterelles in syrup. I brought 1 part water and 1 part sugar to a slight simmer, then added 1 part chanterelles, roughly chopped  (large ones were quartered, small ones kept whole.) Simmer, stirring constantly, for 5 mins. Pour into hot, sterilized jars and process for 12 mins.

Chanterelle cream sauce for pasta:
First, make a roux out of butter and flour to make a base for your sauce. Then add the cream-infused chanterelles left over from making chanterelle-infused cream and add a good splash of white wine and a little more cream. Bring to a simmer and cook down to the desired consistency. Add a tiny bit of freshly-grated nutmeg and some salt and pepper to taste, then serve over al-dente pasta.

I got thea for chanterelle creme brûlée from one of my favorite bloggers, who focuses entirely on wild-foraged ingredients. Check out this post to see lots more recipes and the inspiration for the following experiment! 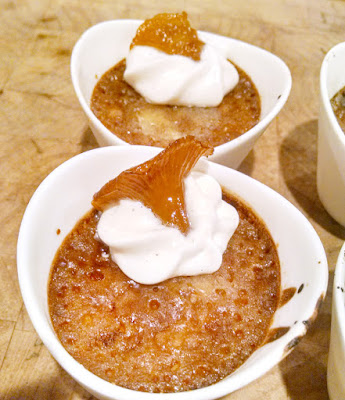 Back to featuring chanterelles in sweet applications. I got the idea for Chanterelle Creme Brûlée from one of my favorite bloggers, who focuses entirely on wild-foraged ingredients. Check out this post to see lots more recipes and the inspiration for the following experiment!  I was really excited to try enhancing the subtle sweet and floral tones of this mushroom in a delicate custard. I based my creme brûlée experiments on this recipe from Betty Crocker. Be sure to plan ahead since it has to chill a couple of times. I made the custard the night before I served it, then broiled the sugar topping the next morning so had time to set up again before my guests arrived. I made a batch with the chanterelle-almond cream, and also the chanterelle-infused almond milk so I could see the difference. 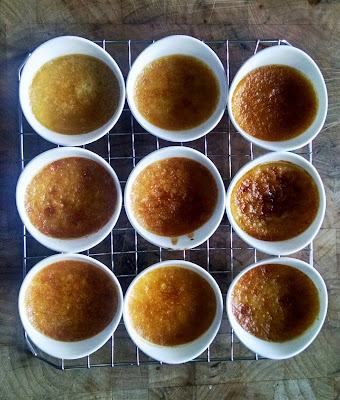 The verdict? Tasty! I could only try the almond milk ones since I am allergic to dairy, but I found it to be a lovely custard that still preserved the floral flavor of the chanterelles. My testers (read: minions) told me that their cream versions were also delicious, but a couple who tried both said they actually preferred the almond milk variety because it wasn't as thick and it was more delicately-flavored. I guess cooking the cream for a bit to infuse the chanterelle flavor thickened it up enough that it was a little too heavy for a creme brûlée. Also, I froze the cream when I made it for later use and as I was thawing it out I got quite worried- it seemed to have separated and had a weird consistency (I'm guessing from the water present in the mushrooms and the combination of basically scalding it.) I was concerned that this would make a grossly-textured brûlée or that it wouldn't even set up, but I couldn't tell the difference in the finished product. Good to know!

I plated them with some vanilla-infused whipped cream and a tiny little candied chanterelle. In the following photo they are surrounded by acorns, because that was our activity at this week's Minion Wednesday: shelling acorns to make some flour. (Stay tuned for future blog posts about that...) 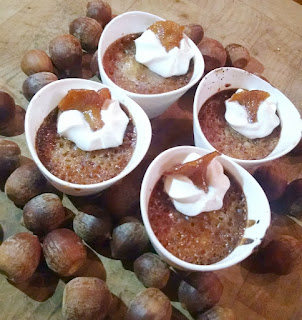 All in all, they were a pretty tasty dessert that captured the flavor of chanterelles well. Highly recommend! And now I'm going to go eat my leftover one for breakfast...