Gin is my favorite kind of alcohol. To me it tastes like the forest, cool and crisp and refreshing! It's no surprise, then, that I love the smell of juniper berries which are the main flavoring component in gin. But what else can they be used for? Plenty, if you're creative about it. 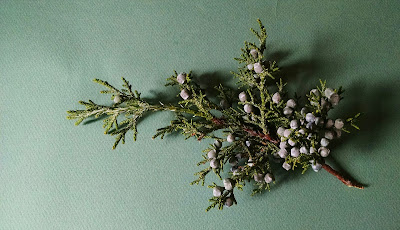 But first, a little about them: Juniper berries are not berries at all, but instead are the small female cones of the juniper tree. There are lots of kinds of junipers, some edible and some not. True juniper berries come from a short sprawling shrub called Junipers Communis. This is what is used to flavor gin, typically. But there are plenty of other plants that go by the name "juniper"- the ones that are usually used as decorative accents are usually Eastern Red Cedar, or juniperus virginiana.  The ones I gathered are Rocky Mountain Juniper, or Junipers Scopulorum. The berries of both of these plants are typically sweeter and less potent than true juniper berries, so you have to use more of them to get the same effect. Fall is a good time to harvest juniper berries- they are ripe but aren't deteriorating at all yet. 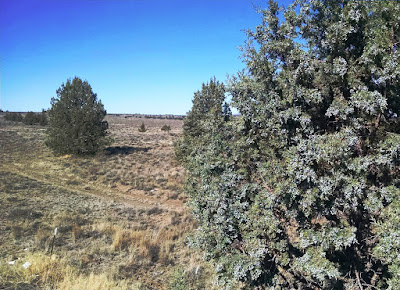 Warning: Not all juniper berries are edible. If they taste strongly bitter, proceed with caution. Make sure you properly identify which particular species you are harvesting and whether or not they are edible! Also, juniper has strong medicinal qualities so consult your doctor if you are taking medications before eating them. Pregnant women should not ingest juniper berries as they can cause contractions. Use with caution in persons with inflammatory kidney disease. 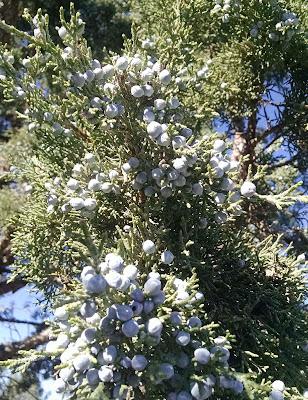 Juniper berries have a long record of use all over the world. The native peoples used them to cure their meats, treat various ailments, and to flavor their soups and stews. The Great Basin Native Americans used juniper as a blood tonic to alleviate symptoms of anemia and re-energize the body. They were also used for colds, flus, and other aches and pains. You can read more about their historical uses in this article by food52. They have also showed up in recipes from all over the world- in Europe they were added to sauces and game dishes to give a bitter, spicy flavor. In Northern Europe they were ground and added to breads and cakes to add spiciness. (On that note I will probably be making some juniper-cardamom gingerbread cookies closer to the Holidays...) The earliest recorded medicinal use of juniper berries is from an Egyptian papyrus dating back to 1500 BC. It was used to cure tapeworms. The Romans used the berries for purification and stomach ailments. 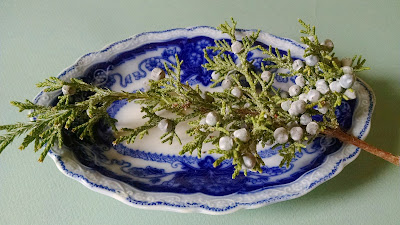 Typically the "berries" are used, though the wood can be burned for highly-scented smoke used to purify sacred spaces and banish witchcraft. It was also used to purify air during the days of the plague. Western European folklore states that if a juniper tree is planted near your door, a witch cannot enter.

But how do you eat them?

Juniper berries should be ground or crushed just before use to preserve the essential oils. Junipers are a strong flavor, well suited to game meats. I found some inspiration for culinary uses of juniper here. Be sure to scroll down to see some lovely plating ideas! I saw a couple of recipes for juniper combined with chocolate, most notably this recipe for chocolate juniper cake with milk jam creme fraiche. There's a technique there that I definitely want to try- coating dense cake with sugar, then pan-frying to make a crunchy coating. Yum!

Since juniper berries are so good with rich and gamey meats, I decided to try making a pot roast using them as flavoring. This recipe would be even better using a venison (or other wild game) meat, but beef is delicious as well. 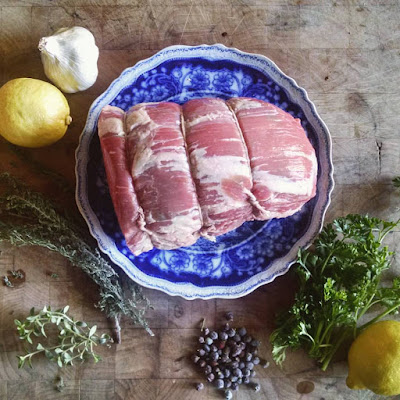 I based my roast very loosely on this recipe.  First I made my spice mix. I did this by taste, so I can't give exact measurements but you'll get the idea. I blended about 1 Tbs. dried juniper berries with a few springs (2 Tbs worth) dried yarrow* in a spice grinder. Then I chopped some parsley finely until I had about 1/3 cup and added that to a bowl with the juniper/yarrow mix. I chopped up 2 cloves of garlic and added that, then grated some lemon zest in there. Added about a Tbs of dried thyme and some salt and pepper, then mixed it up well. I added the juice from 1/2 lemon and a drizzle of olive oil to make a paste. 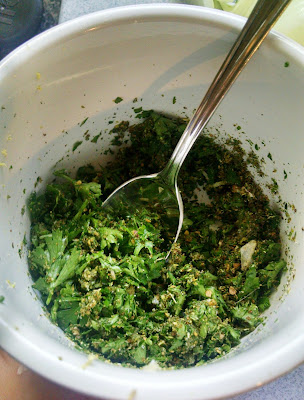 Then, I heated some olive oil up in an oven-safe pan and seared the roast in it for about 5 minutes, turning to get all the sides. Then I removed the roast from the pan and set it aside on a place. To the hot pan I added 1 onion, coarsely chopped, and let it brown for about 10 minutes stirring occasionally. I added the roast back in and rubbed it with the mix I'd made. I tossed in a few sliced garlic cloves, some whole juniper berries, some springs of thyme, 1 cup water, and 1 cup chicken broth and brought that to a boil. Then I stuck the whole thing in a 350F oven and let it cook for an hour (longer if the roast is bigger!) After an hour I added some chopped potatoes and carrots and let it cook for another hour.

*Yarrow is another wild medicinal herb. You can leave it out if you don't have any, or add some rosemary or other bitter herb in its place. 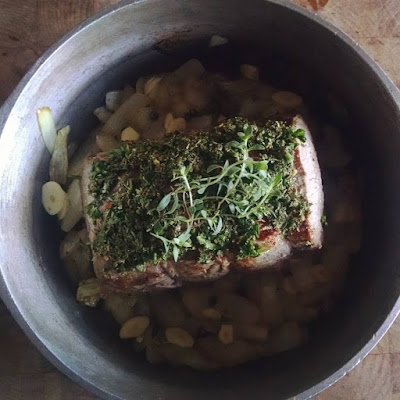 It was a delicious roast, and tasted like the forest just as I had hoped. Plus once the added Juniper berries were stewed they weren't very bitter at all and were tasty to nibble on.

But I also wanted to try something sweet as well, and started thinking about various gin drinks that I enjoy as a starting point for inspiration. I remember one this summer that was made with muddled blueberries and gin, so I used that as an idea to launch me into brainstorming. One of my favorite desserts is an Australian treat called Pavlova, which is what I would imagine eating clouds tastes like, except with a lot more sugar ;) It consists of an airy and crunchy meringue base topped with fluffy whipped cream and fresh fruit. I decided to make a Blueberry Juniper Pavlova. I made the meringues using a basic meringue recipe, except I added about 1 Tbs of finely ground juniper berries to my meringues before piping them onto a baking mat. (For reference, my meringue batch was 6 egg whites, 1/2 tsp. cream of tartar, a pinch of salt, and 1 1/2 cups sugar.) If you need some good directions to make meringue, I recommend this site. Once the meringues were done, I topped them with some lightly-sweetened whipped cream and fresh blueberries. How'd they turn out? Awesome. These were so good! And I know it's not just me that thinks that because my minions had seconds...and thirds...and one for the road...and one for the husband... :) My only issue with them was that it was difficult to grind the juniper berries as finely as I would have liked, so the meringues were ever-so-slightly gritty. Perhaps making a juniper syrup and stirring it into the meringues would have worked better. It wasn't a big deal and would add an extra step, so just keep it in mind as a suggestion not a necessity. 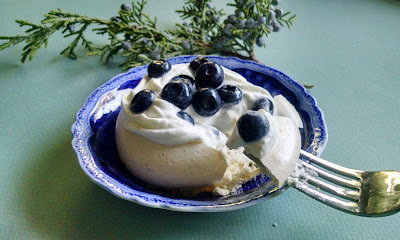 Still want more? Check out this post by Serious Eats. It's seriously good.
Also, here's a collection of juniper recipes by a lot of fantastic wild foraging writers.
Posted by Betsy Hinze at 9:38 AM