Black and White: Happy New Year to me!

This seems as good a time as any to talk about light and darkness, endings and beginnings.

For those of you that don't know, I have been having excruciating, debilitating, and occasionally life-threatening health issues ever since a severe neck injury as a teenager (8 years ago, to be precise. A third of my life so far.) Most of it has been a partially paralyzed digestive system, though I have had other issues as well. A couple of years ago, the complications from this almost killed me. I dropped 30 lbs. in a month and was on a liquid diet for 3 months. I was in constant excruciating pain. I felt hopeless and scared, on the brink of death. Many nights I hoped I would die- if only as an escape from pain.

This experience has been very difficult for me. I've had PTSD flashbacks from those nights spend laying on my bathroom floor, convinced I was going to die. I've broken down to tears after the smell of the soap used in the hospital or the intro to a radio show I listened to when I was at my worst.

As a way to cope with the pain of the past, I looked to my art practice. This summer I held an event called "Chiaroscuro," which is an Italian word used in describing paintings or photography that show a large contrast between light and dark. I knew that the only way I would make peace with my "dark" would be to see how it illuminates the light in my life, and I wanted to share that experience with others. This event was not just about the dualities of good/bad and light/dark but rather a CELEBRATION of the contrasts in our daily lives- without sour, would we notice sweet? Without rough, would we appreciate smooth? This event took the form of a cocktail party featuring a menu of contrasting all-white and all-black foods. Everything came in pairs, but the black version of each pair tasted drastically different from the white version (briny black caviar to sweet white elderflower cake and milk pearls, for example.) You can see more photos from this event on my website, www.betsyhinze.com

This event was very healing for me. I shared my experience with the guests that attended, and they shared their own battles with me. In the safe setting of a formal party, we collectively opened up to one-another and learned so much about moving forward. At least I did. 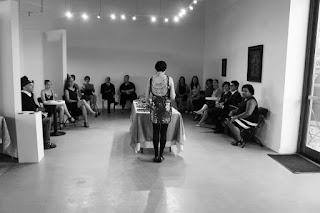 But this was not the end for me. Though I've been much better this year than I was the year before, I have still been struggling a lot with my health. I spend days in bed every month, too sick to work. I get frustrated with my limitations. So, back to the drawing board:

Over these last 8 years, I have seen many doctors, and some helped more than others. So many of my symptoms seemed unrelated and bizarre, making it difficult to pin down the real problem. Finally, I started putting together the pieces to form a guess of nerve damage, which would explain my weird variety of symptoms. I then went to an orthospinologist, which is a highly specified and accurate Chiropractic doctor that focuses on the uppermost vertebrae where the spinal cord comes out of the skull. Turns out, mine was all kinds of messed up: heavily skewed to the side and rotated, putting a tremendous amount of pressure on the left hemisphere of my brain as well as putting pressure on some vital nerves, the vagus nerve included. A couple of days ago we went over test results and he did a small but very precise adjustment using specialized tools. 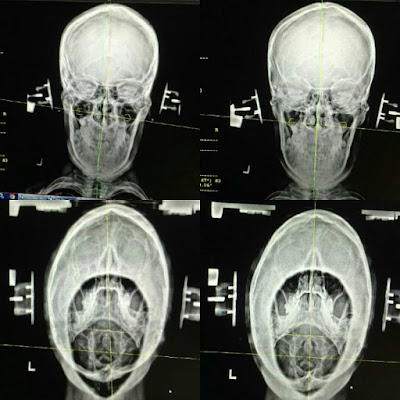 He got very excited when we took the "after" x-rays (on the right side, above) and said that what we'd accomplished in one day is "nothing short of a g*ddamn miracle." Now I need to take it easy for a while and hope the adjustment sticks, it may take several tries. Then, time will tell what effect this will have on my body but I am feeling very hopeful. This is the first time since the injury that I have found a theory that can explain ALL of my symptoms, from the slowed digestive system to the muscle spasms in my abdomen to my hormonal imbalances (my body thinks it is going through menopause at 24) to a myriad of other things. My doctor thinks that these nerve issues are caused from compression rather than permanent damage. With time, I could have a hope of reversing a lot or even all of the problems. I could be free from the pain and suffering I have experienced the last 8 years. I could get my body back.

I can't even begin to describe what an emotional whirlwind the last few days have been. I'm afraid of getting my hopes up- I had almost convinced myself that I'd have these issues forever and would just have to learn to cope with them. I am overwhelmed with the possibility of the freedom that only health can bring. I am scared of the recovery- because I know things will probably get worse before they get better. But most of all I am elated, ecstatic, overflowing with gratitude and the hope of new beginnings. What a perfect way to start the new year.

I'm hoping that when I reflect on 2016, I can look back on a year of health. I'm hoping that I can eventually be grateful for the injury that caused all of this pain, because it has shaped who I am. I would not be who or where I am today without this terrible tragedy. I'm hoping that in a year, I know what it feels like to be able to travel and plan and work like a normal healthy person. I've got a lot of hopes and expectations pinned on this next year. Time to let time unfold and bring some answers. Hello 2016.