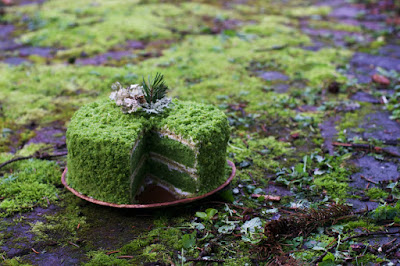 
When I first saw the Turkish cake called Ispanakli Kek, I got very excited. The cake was bright green! And the green was obtained naturally with a bizarre secret ingredient: spinach. When I searched it most of the recipes were in Turkish, but the handful that were in English were mostly moms really excited about tricking their kids into eating lots of spinach.

I was really excited to try making this cake because it looks just like moss. And I LOVE moss. But I also love foraged flavors, so I started brainstorming how I could give this green cake some Oregon terroir. The answer came to me in a common spring green that just so happens to be in season right now: stinging nettle. Upon further research, it appears that I am not the only one with this idea! I decided to use a combination of the two above recipes, with a few tweaks here and there. I also doubled the recipe to make plenty for playing with. Here's what I did:

I prepared my nettles by picking off all the leaves (wear gloves!), and then boiling them for a couple of minutes, straining them, and plunging them into and ice bath to blanch. Then I pureed them into a smooth paste in my blender. To make the spinach puree, I just blended the raw baby spinach leaves in  the blender with enough water to get them to form a smooth puree.

Add 2 tsp. vanilla, 4 Tbs. lemon juice, and the zest of two lemons. Mix well. Add 1 cup nettle puree, and 1 cup spinach puree. (*Note: I know that stinging nettles have a bit stronger flavor than spinach, so I substituted half and half. In retrospect, doing all of either nettles or spinach would have been fine!)

In another bowl, sift: 4 c. flour (I used a gluten free baking mix), 4 tsp. baking powder, and 1/2 tsp. salt. mix well, then mix into the spinach mixture. Pour into baking pans and bake for 25 minutes, or until a toothpick inserted in the cake comes out clean. 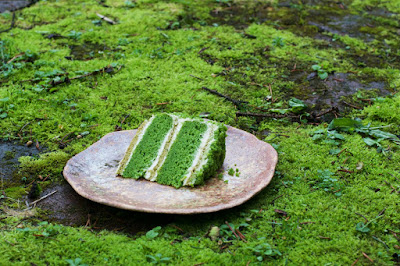 An Ode to Moss:

I have a thing for moss. Seriously. Whenever I see a vast expanse of soft, glowing green alive-ness, I want nothing more than to take off all my clothes and lay down in it and allow my body to feel the soft texture and damp earthiness all over. I feel nurtured and alive, the spongy ground giving way to support my curves and tickle my skin. I am usually able to ignore these urges (when I am on a public trail, for instance) but every now and then I just dive right in and immerse myself in this green world, admiring the way dewdrops sparkle on the reproductive stalks or the way the damp earth smells. The forest is my home, and moss is my bed. Not only does this cake look like moss, it is flavored with the plants that grow in these magical mossy forests. Citrusy and light, it's a perfect ode to springtime!
...
Stinging nettle and lemon cake with thin layers of almond matcha genoise and douglas fir-grapefruit buttercream. 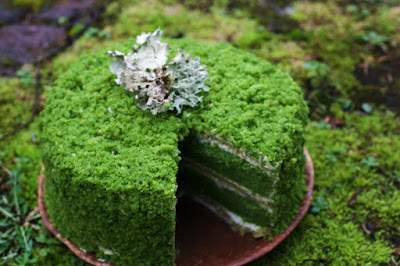 For the matcha genoise, I used SprinkleBake's recipe.

For the douglas fir-grapefruit buttercream, I didn't really use a recipe- I just do it by feel. I beat about a cup of shortening with some salt, then added some powdered sugar until the mixture was stiff. I beat in about 1 Tbs. of ground douglas fir needles (fresh) and added a couple Tbs grapefruit juice until the frosting was fairly runny. I alternated adding powdered sugar and grapefruit juice until it was the consistency and sweetness I wanted.