It's finally time to announce the changes I've been working on all summer! Woo-Hoo! First thing: from now on, all of my events will be FREE. Yep, you heard me. I have decided to stop doing commercial events. It just feels wrong to charge for these sensory gifts- plus having a hefty price tag to cover costs alienates many of the people I would hope to attract. INSTEAD, I am going to be doing a minimum of 4 free events a year in locations all over the NW!
But here's the catch: now, the only way to attend a Betsy Hinze event is to be in the right place at the right time with the right mindset of curiosity, or to sign up to volunteer or host (which you can do on my website) I'll be using unconventional methods to invite guests to these events and you never know where you might find one next. I'll also keeping these events smaller so I can really focus on the art pieces taking center stage at them. I want to shy away from mass-production and give each piece the attention it deserves. They'll now be sold as Artifacts, since each one will be more than a piece of artwork; it will carry within it the memory of a magical experience. They will come beautifully packaged with a signed and stamped Certificate of Authenticity, and each piece will be now stamped with my logo.
And, another plot twist: MY ARTWORK WILL ONLY BE AVAILABLE TO THE PUBLIC FOR ONE WEEK EVERY QUARTER! And the way to get "first dibs" on these special pieces is to support me on Patroeon so you can get a secret password for the first week of sales before it opens to the public for one more week.
Speaking of Patreon... you can support my vision for these events by becoming my patron through this awesome site. You can sign up for a monthly donation in your choice- with some awesome thank-you prizes for donations over $5 or $10/month. A little goes a long way! Also worth noting: I will do these events no matter what, no matter how many donations I get. They are my gift to the world, and any contribution you make is your gift to me. Every donation will go towards covering the costs of these events. <3 all="" associated="" be="" costs="" donations="" events.="" for="" my="" of="" span="" used="" will="">
Whew! Thanks for reading all the way to the end, and I'm excited to share this journey with all of you
Posted by Betsy Hinze at 1:17 PM No comments:

I read an article this morning that really got my brain turning. It's a long read but be sure to go all the way to the end for some interesting plot-twists. Here's the link to The Times' Article about Damon Baehrel. 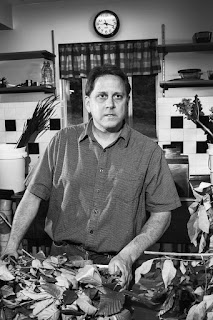 Spoiler alert: (You should really just go read the whole article to get a better picture of the backstory):
Times writer Nick Paumgarten heard of "the most exclusive restaurant in America", run by Damon Baehrel, and had some questions.

First, why does this restaurant that seemingly nobody has heard of have such a packed registration list? “I didn’t understand how the secret had been kept,” says Jeffrey Merrihue, a gastronomique that travels the world in the sort of gastrotourism with the mission to dine at the best restaurants in the world. He attended for the steep price of about $430 per person and described it as being the "most memorable meal I have ever had. Would it have been my favorite if it had been made by twenty people? O.K., no. But top ten, maybe. I have never seen anywhere where one person does everything.” Despite this, the restaurant (which serves several meals a day of many courses each) is booked solid until 2024.

Equally puzzling is the sheer amount of work that goes into this restaurant, which is "simply called Damon Baehrel, after its presiding wizard and host, who served as forager, farmer, butcher, chef, sous-chef, sommelier, waiter, busboy, dishwasher, and mopper. Baehrel derived his ingredients, except meat, fish, and dairy, from his twelve acres of yard, garden, forest, and swamp. He made his oils and flours from acorns, dandelions, and pine; incorporated barks, saps, stems, and lichen, while eschewing sugar, butter, and cream; cured his meats in pine needles; made dozens of cheeses (without rennet); and cooked on wooden planks, soil, and stone. He had christened his approach Native Harvest." -sounds like a lot of work! How does Damon manage to not only cook for 30+ people a week in meals that consist of 15 courses, but when does he find the time to forage and process all of his ingredients?! It conjures up an image of a magical elf-man, employing forest squirrels ala Cinderella to cracks his nuts for him. But what a refreshingly wholesome concept- a dining experience consisting of a dinner in a cozy basement somewhere in upstate NY, eating precious little bites of carefully processed and prepared ingredients, everything sourced from a few acres (12, specifically) of woodland and gardens.

At first Paumgarten is completely entranced by this wonderland of wild foods, processed deftly and elegantly by a chef so masterful he doesn't even have to clean the kitchen afterwards: "I offered, as one does, to help clean up, and Baehrel laughed. Now he invited me to see his kitchen. It was quite small, about two hundred square feet, and immaculate. It didn’t look or smell as though anyone had prepared a gourmet meal in there."

But once the magic of the meal started to wear off, Paumgarten became more and more suspicious. It seemed strange to him that one man could do all the work required of him to run this place entirely alone. Baehrel refused to share with him anything personal, or anything about running the business- not even who is few suppliers were. More digging brought up more discrepancies; enough to arouse suspicion. I have to admit, I'm a skeptic of some of his claims as well. I know how much time it takes to harvest and process wild ingredients, and how little edible foodstuff you get per pound of some plants. I have a hard time believing his 12 acres would be enough to feed 40 people a week (or more, according to his claims) with just one person doing the work. Many things about his operation seem fishy- the numerous de-bunked celebrity guests (despite his supposed apparent disdain for "celebrity chef culture"), the ultra-tidy kitchen with no scent of food preparation, the mysteries around his supplies and assistant, etc. Also why is he so convinced that other chefs are trying to sabotage him? If he truly is solidly booked for the next 10 years (which I doubt), he needn't be worried about any competition.

Don't get me wrong, the man is clearly a master of wild cuisine and knows what he's talking about- lots of cool ideas for exploration in that article (Pine needles for curing meat? How fascinating! Saps that taste salty? How curious!) It seems obvious to me that he has spent a lot of time getting to know the plants and fungi on his land and how to process them. Just the descriptions of his dishes made me salivate. My curiosity at the flavors and textures presented is definitely piqued and I would so love to experience one of his meals myself!


He also knows how to construct a compelling story. The vision of a hermit in the woods painstakingly preparing and presenting precious bites of the forest, the exclusivity and secrecy behind his operations. The question is... where does the reality end and the story begin? (And, a second question: does it matter? People so enjoy the myth of this woods-hermit and his creations that it seems like it would almost be like telling a small child that Santa doesn't exist to de-bunk his mysterious back-story.)

I'm curious- what do you think? Is it better to just trust in the myth and indulge in what must surely be a purely magical meal, or is it better to know the truth even if it shatters some truly beautiful illusions? Or do you think that perhaps there isn't anything to discover and that this man is everything he claims to be and more, and that the rest is just speculation and rumor-spreading?
Posted by Betsy Hinze at 11:11 AM 7 comments: